The church of St. Procopius

The church of St. Procopius in Letiny is believed to have been built at the end of the twelfth or the beginning of the thirteenth centuries by the Knights of Letiny; first mentions of it were dated 1358. During the Hussite wars, the church was partly destroyed and, at the beginning of the Thirty Year War, the parish was burned and its spiritual records destroyed. In 1682, Letiny the property of the Pikhart of Grünthal knights, and, at the beginning of the eighteenth century, Letiny became the property of the counts of Morzin. The new owners restored the parish in 1766 the first parish priest became Karel Jan Koutecky.

One of the most important religious figures to hold the office of priest of Letiny was Father Josef Ondřej Lindauer. After his service in Letiny between the years 1813 and 1817 he was appointed the Deacon of Přeštice, then the Archdeacon in Pilsen, and eventually, the Bishop of České Budějovice. Among the numerous parish priests and administrators who worked in Letiny, we must not forget a generous donor, Petr Durchánek, who contributed especially to the installation of a new organ in 1886.

For almost the entire first half of the twentieth century the history of the Letiny parish is linked to the name of Father Josef Soldát, who worked there from 1908 until 1948. On the occasion of its 700th anniversary in 1935, he had the church repaired.

A difficult period started soon after 1948 for the Catholic Church and all free-thinking people, but that is a story which is quite well known. In the 1970s, when the repression against the Catholic Church by the Communist regime was not so severe as in the 1950s, the church, which had been in a poor condition, was eventually repaired. The work confirmed that not only the presbytery but also the nave are original Gothic structures. 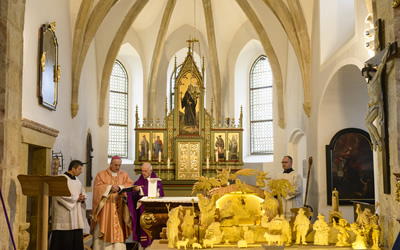 The church is currently undergoing an extensive renovation initiated and coordinated by the Saint Procopius Society in Letiny in partnership with the National Heritage Institute, using sponsorship and grants. The Priest of Blovice and Letiny administrator, Father Piotr Marek, is also of great help.

The current renovation also aims to restore all parts of the church furnishings that were destroyed or stolen. For example the pulpit, confession boxes, statues and ornaments. We also plan to restore the frescos.

During the renovation, traditional techniques are used in order to preserve the original historical character of the church. Modern technology, however, also has its place, for example in the heated seats developed by Applycon in partnership with LUKR, companies participating in the reconstruction.

The Society of Saint Procopius would like to express its gratitude to all the generous donors, sponsors, and sympathizers, without whom the reconstruction of the church would not be possible. 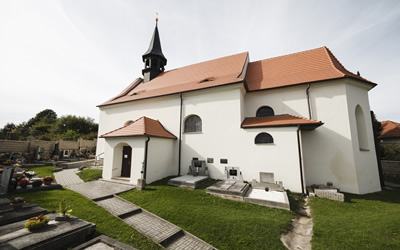 The parish Church of St. Procopius in Letiny has been the dominant of the municipality for eight centuries. The Saint Procopius Society intends to return the church its function of the centre of the municipality, around which the town‘s cultural, social and spiritual life used to revolve.

For Catholic Christians, the church is a place where the earthly world and heaven meet. It is a meeting place of people and God. And, finally, a place where people meet each other to share their faith. The members of the Society hope that they are successful in contributing to a somewhat broader sharing: sharing the story of a place to which we are linked by our own family history, and by accepting our part of the responsibility for its future regardless of our beliefs and walks of life.

Churches are, apart from being places of worship once again, also places of culture in the widest sense of the word, and Letiny church is no exception. The Society of Saint Procopius organizes benefit concerts the proceeds of which go to maintaining the church.

We believe that after centuries of uncertainty the church of Saint Procopius can look forward to a happier future which it deserves as the witness to the very beginnings of the town and its companion through both its better and worse times.

Contribute to the renovation of the Church of St. Procopius
Bank account No. 260339246/0300 at Československá obchodní banka
We would like to thank to all generous donors, sponsors, and supporters without whose support the reconstruction of the church would not be possible.